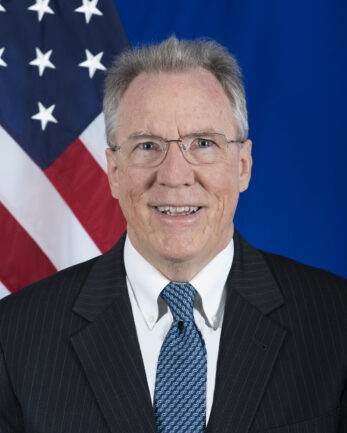 David R. Gilmour is U.S. Ambassador to the Republic of Equatorial Guinea.

He was nominated by President Biden on August 6, 2021, the U.S. Senate confirmed him for this position on December 18, 2021, and he was sworn in during January 2022.  He is a career member of the Senior Foreign Service, class of Minister-Counselor.

Amb. Gilmour is the former U.S. Ambassador to the Togolese Republic, where he oversaw the launch of a groundbreaking $35 million Millennium Challenge program.  Most recently, he was Chargé d’affaires, a.i. at U.S. Embassy N’Djamena, Chad.  He has worked in Africa and on issues impacting the African continent for the majority of his more than 36 years in the Foreign Service.

In Washington, DC, Amb. Gilmour has served as the Deputy Assistant Secretary for Central Africa in the Department of State’s Bureau of African Affairs, where he oversaw U.S. policy toward ten African countries, including Equatorial Guinea.  He was also previously the Director of the Office of East African Affairs, as well as the Director of the Office of Public Diplomacy for Africa.

Originally from the state of Michigan, he now calls Texas home.  Amb. Gilmour received a B.A. from Saginaw Valley State University in Michigan, and an M.A. from the University of Texas at Austin.  The recipient of numerous awards, including the Partnership Excellence Award from the Secretary of State’s Office of Global Partnerships, he speaks French and Spanish.  He is married to Judith Martin and they have three adult children.