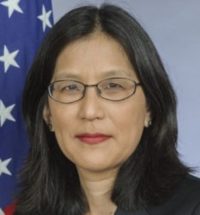 Julie Furuta-Toy was confirmed by the United States Senate as U.S. Ambassador to the Republic of Equatorial Guinea on October 22, 2015.  Ambassador Furuta-Toy is a career member of the Senior Foreign Service, class of Counselor.  She earned a B.A. from the University of California at Riverside in 1981, a M.A. from Indiana University, Bloomington in 1984, and a M.S. from the National Defense University in 2004.

Ambassador Furuta-Toy has demonstrated outstanding leadership, strong interpersonal and team-building skills, as well as expertise in administering development programs and doing consular work, during a 29 year career in the U.S. Foreign Service.

Prior to her arrival in Malabo, Ambassador Furuta-Toy served as Charge d’Affaires and DCM at U.S. Embassy Oslo, Norway (2012-2015) and as DCM at U.S. Embassy Accra, Ghana (2009-2012).  Prior to that, she served in the Department’s Bureau of Consular Affairs as Director in both the Office of Children’s Issues (2007-2009) and the Office of Public and Diplomatic Liaison (2004-2007).  Ambassador Furuta-Toy’s other overseas postings include Moscow, Mumbai, Port-au-Prince, and Manila, Philippines.  In Washington, she has served in the Bureau of International Narcotics and Law Enforcement Affairs and in the Bureau of Personnel.

Ambassador Furuta-Toy is married with two adult children.  She speaks Spanish and Russian. 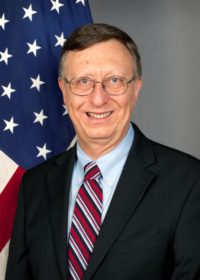 Mark L. Asquino was confirmed by the U.S. Senate as U.S. Ambassador to the Republic of Equatorial Guinea on June 29, 2012.  Ambassador Asquino arrived in Equatorial Guinea in August 2012 and presented his credentials to President Teodoro Obiang Nguema in Malabo on October 4, 2012.

A career member of the Senior Foreign Service with the rank of Minister Counselor, Ambassador Asquino most recently served as the Executive Assistant in the Office of the Under Secretary for Civilian Security, Democracy, and Human Rights at the U.S. Department of State.  From 2010 to 2011, he served as a Senior Public Diplomacy Fellow at George Washington University.  Previously, he served as Deputy Chief of Mission at the U.S. Embassy in Sudan and at the U.S. Embassy in Kazakhstan.   Ambassador Asquino has also served overseas in Caracas, Panama City, Madrid, Bucharest, Santiago, and Tashkent.  In Washington, he has served as the Principal Deputy Coordinator for Reconstruction and Stabilization at the U.S. Department of State.  Ambassador Asquino received his A.B. and Ph.D. in American Civilization from Brown University. 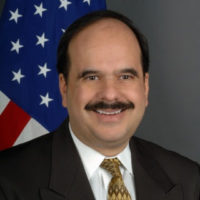 Ambassador Fernandez was confirmed by the U.S. Senate on December 24, 2009 as U.S. Ambassador to the Republic of Equatorial Guinea and served there until March 2012. He served previously as US Charge d’Affaires to the Republic of Sudan from June 2007 to May 2009, also as Director for Near East Public Diplomacy (2005-2007), Director for Iraq Public Diplomacy (2004-2005) and in senior public diplomacy positions at the U.S. Embassies in Afghanistan, Jordan, Syria, and Guatemala. A career member of the Senior Foreign Service with the rank of Minister-Counselor, he is a recipient of a 2008 Presidential Meritorious Service Award, the 2006 Edward R. Murrow Award for Excellence in Public Diplomacy, a 2003 Superior Honor Award for his work in Afghanistan, among other awards. His work has garnered Senior Foreign Service performance recognition in 2010, 2009, 2008, 2007, 2006, 2005, and 2002.

Mr. Fernandez has also served as a Foreign Service officer in Iraq, Kuwait, Nicaragua, the Dominican Republic, and the United Arab Emirates and as USIA desk officer for Egypt, Yemen, and Sudan. He is a graduate of the 46th (2003-2004) Senior Seminar, the State Department’s premier senior management course.

A graduate of the University of Arizona and the Defense Language Institute, he served in the U.S. Army from 1976 to 1979 and came to the United States as a refugee from Cuba in 1959. He has published in ReVista: the Harvard Review of Latin America, Middle East Quarterly, the Journal of the Assyrian Academic Society (JAAS), and lectured and debated on U.S. foreign policy in numerous public venues. Mr. Fernandez speaks fluent Spanish and Arabic.  He is also a member of the American Foreign Service Association (AFSA).