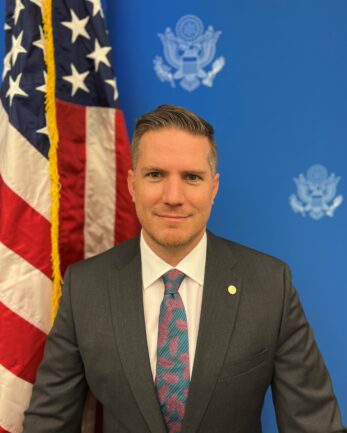 A career member of the Foreign Service, Mr. Palsrok has worked for the Department of State since 2004.  Prior to this assignment, Mr. Palsrok served in Casablanca as the Consular Chief for the U.S. Mission to Morocco and, before that, as the Chief of Immigrant Visas at the U.S. Embassy in the Dominican Republic.  From 2012-2015, he was the Assistant Director of the New York Passport Agency.  Mr. Palsrok also previously managed American Citizen Services at U.S. Embassy Beijing, China and spent six years in the Department of State’s Office of Children’s Issues, working for the protection of children in intercountry adoption and international parental child abduction.  Mr. Palsrok is the recipient of numerous Superior Honor Awards and has twice been nominated for the Barbara Watson Award for Consular Excellence.

Before joining the Department of State, Mr. Palsrok was the Membership Coordinator for AIDS Action, a U.S. national HIV/AIDS policy organization in Washington, DC.  He previously worked for a United States Senator and the Human Rights Campaign.  Mr. Palsrok speaks Spanish and French.  Originally from Hawaii, he also lived in Nigeria as a child.  He is the proud uncle of eight nieces and nephews and a graduate of Middlebury College in Vermont.