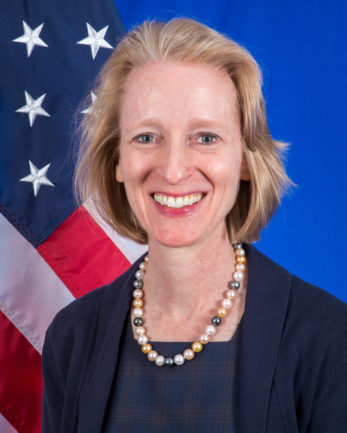 to the Republic of Equatorial Guinea

Susan Stevenson was confirmed as Ambassador to the Republic of Equatorial Guinea on January 2, 2019.  She previously served as Principal Deputy Assistant Secretary in the Bureau of Public Affairs from January 2016.

Ms. Stevenson is a career member of the Senior Foreign Service with the rank of Minister Counselor.  In Washington, she has also served as Chief of Staff and Executive Assistant to the Under Secretary for Public Diplomacy and Public Affairs; Director of the Under Secretary’s Office of Policy, Planning and Resources (R/PPR); and Deputy Assistant Secretary in the Bureau of East Asian and Pacific Affairs.

Overseas, she was the U.S. Consul General in Chiang Mai, Thailand, following assignments in Beijing, Hong Kong, Mexico City and Bangkok. Ms. Stevenson has led U.S. government efforts to promote entrepreneurship and the creative economy.  She has also lectured extensively on government-media relations at journalism schools and with government spokespersons.

Ms. Stevenson is a recipient of the State Department’s Leadership Award on Equal Employment Opportunity, as well as Superior and Meritorious Honor Awards.  Prior to joining the U.S. government, she worked in product management for the Kellogg Company, including as Category Brand Manager for Children’s Cereal, Kellogg’s Produits Alimentaires in France.  She holds degrees in multinational management and French from the Wharton School, University of Pennsylvania.  In addition to French, Ms. Stevenson speaks Thai, Mandarin Chinese, and Spanish.  She has three children.